„It’s time to come to an agreement!“ Laurent Fabius, the president of the COP21 conference announced. We have waited long to address climate change. After two weeks of hard work and 21 years of discussions, an ambitious agreement on climate change is approved. The document is a turning point for the faith of the world.

Pacific voices did not get drowned

COP21 was a moment of truth were islands facing up oil states for a just deal. Diplomats decided with foggy minds in night-long discussion about our future. The atmosphere was varying between hope, frustration and practical optimism. Threatened by rising sea levels, islands stood powerful and united and pushed the conference ahead. Tiny islands drove this change as they were seeking for a guarantee of their survival. But nevertheless the 1.5 °C target is a surprise win. Nations like Saudi-Arabia were long time blocking arguments for an ambitious agreement, as their economies were at stake. Tony de Brum, Minister of Foreign Affairs of Marshall Islands, emerged as moral leader of the conference and formed a coalition of high ambitious states. Finally Pacific voices did not get drowned. A turning point for the world.

We are fighting, we are not drowning!

This conference is also a success for the climate justice movement. There was and still is a huge pressure from civil society at the conference venue of COP 21 – but also all over the world ahead and during the Paris conference. Hundreds of thousands took to the street demanding for climate action. Amazing pictures of colourful crowds were shared all over the world. Young people acted as agents of change as they are left with a climate mess. Many artists work to turn the tide with poems, stories and art. Also religious groups made a unprecedended push for climate action. The movement gained an important momentum with the encyclica „Laudato Si“ of the pope.  All of them stand in solidarity with the Pacific and other vulnerable regions of the world. The mobilization around COP21 lead to a form of inner resilience: It connected hearts and minds of many people worldwide. As Fenton Lutunatabua activist of the organisation 350.org summarized it: „I can see humans in humanity again.“

But people will continue losing homeland to encroaching seas. After each destruction themselves: „Build it up or let it drown?“ Most households in the Pacific are mulling about migration. Young and old are divided over this topic. Younger people consider to move. Law traps Pacific islander yet on their islands as climate migration was in a legal limbo. Climate migrants are now recognized for the first time in the Paris agreement. The debate about climate migration gave the COP21 a human rights dimension.

Who will pay for the dire consequences of a hostile climate? Island nations asked for financial commitments from those who caused climate change. They wanted a compensation for the loss and damage that occurs in their country due to climate change and an easier access to climate finance. Not all demands were heard but the topic is on the floor now.

There is no time to lose

Climate change does not stop with an agreement.  After the conference the fight for climate justice continues. Not climate rhetoric counts but only climate action. The Paris agreement will lead to a massive boost of the renewable industry. States agreed on voluntary national contributions – the so-called INDCs. There were good and bad surprises. But the unexpected move to 1.5°C is politics. But is holding warming at 1.5°C realistic? The echoes of the scientific community are diverging. Though climate pledges are ambitious the targets of the agreements are too low lax to achieve a world well below 2°C warming. There is still the risk that we are crossing the thresholds of climate tipping points which leads to catastrophic warming.

The sea level is predicted to rise by up to a meter by the end of this century. On Tuvalu, Marshall Islands and Kiribati nearly 100 % of the population live below 5 metres above sea Level. Especially for the climate predictions for the Pacific region have data gaps with enormous uncertainties. Uncertain about the future, islands have to be prepared. Entire forests are planted to save island homes from erosion. Sometimes it’s enough, sometimes not. Some climate change impacts appear even sooner than sea level rise. As water and soil gets salted, islands will starve before they are flooded. Especially indigenous People carry this burden. Many important initiatives were launched in Paris to tackled climate change adaptation. Faced with loss of their islands, 5 nations launched the „The Pacific Rising“ plan – a Marshall plan for the islands. Let’s hope that castle-like seawalls and worse can be avoided.

A refrain of a song in Kiribati says „The angry sea will kill us all“. The conference was not about survival of islands only, but about saving humanity. Islands are ground zero of climate change, but no nation is immune to its implications. As an indigenous leader spokes out on the conference: „If we vanish, we vanish together.“ Therefore let’s head for a decarbonized world! 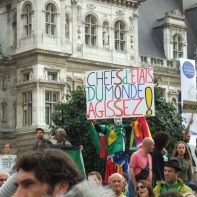 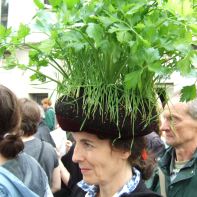